Mind your French (and English)! 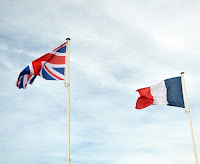 [Flags of the United Kingdom and France*]

Profiting from some free time this Friday (to accentuate the positive as Johnny Mercer wrote), I was directed to and listened to several podcasts prepared by the French Division of the American Translators Association. I found them very interesting and relevant both to translators and customers as they presented issues and solutions in French-English translation (both ways). They also reinforced the notion that wisdom is the knowledge of how much there is still to learn.

In the podcast on financial translation, Amanda Williams strongly demonstrated how important subject material knowledge is vital for accuracy. Since French and English share many roots and almost as many false friends, blindly using the shared root is often but not always incorrect. For example, the French word contrôle can be translated as audit in English but also control, depending on the context. Familiarly with the IFRS, which is the international accounting regulations, is vital as exemplified by the English translation of the French immobilisation corporelle: property, plants and equipment. A final example is the catch-all French term operations, which is often rendered activity in English. As the speaker said, the world needs more great financial translation, with emphasis on the word “great”.

In their podcast on Translations that pop, Angela Dubois and Andie Ho presented effective translation solutions of difficult source material and made it clear how native-language familiarity with the target language and understanding of the intended message are keys to the art. Citing a translation for the marketing phrase gérer votre quotidien devient facile by Natalie Fadi [apologies in advance for this spelling], they praised the effectiveness of managing your day to day just got easier, noting that the subtle adding of the word just and change in the form of easy made the translation seamless. Likewise, the same translator translated the phrase Elegance à la plage, de la plage à l’ėlegance regarding designer clothing into Elegance from dawn to dusk. The commentators noted the primary element was the flexibility of use the clothing, not the beach, as well as the switch from place to time. Finally, Ms. Dubois presented her French translation of the English marketing phrase for an application. Acme, any time and any place became Acme, dans votre poche [Acme in your pocket]. In translating marketing material, both the intended message of the source material and the sound and rhythm of the target language must be considered.

Finally, Miranda Joubioux gave several examples of problematic words in French that had been discussed in the Pet Peeves and Betes Noirs website. The first terms she discussed were the French words accueillir and accueil, mentioning several options, including host, house, include, live, cater to and be open to. Similarly, the common French word acteur can be translated into stakeholder, player, insiders, movers and shakers, to name a few, or even be ignored. A final example is the phrase dans le cadre de, which is generally too formal for English. Options include as part of, in and at. What arose from the discussions is that blind obedience to French syntax and word choice is poor translation.

The fruits of my Friday labor were greater understanding and appreciation of the differences between these two somewhat related languages. Since I also translate into English from non-related languges (Russian and Hebrew) in addition to from French the podcast reinforced my feeling that their closeness actually made translation more difficult, not less. In any case, it is a lifetime of work but a work of love to fully appreciate their varying manners of expressing ideas. Vive la difference!

*Insert a picture description in your posts to allow full access to the blind. Picture credit: Image by <a href="https://pixabay.com/users/baptiste_heschung-226926/?utm_source=link-attribution&amp;utm_medium=referral&amp;utm_campaign=image&amp;utm_content=1441871">Baptiste Heschung</a> from <a href="https://pixabay.com/?utm_source=link-attribution&amp;utm_medium=referral&amp;utm_campaign=image&amp;utm_content=1441871">Pixabay</a>

Posted by Stephen Rifkind at 7:54 AM