Yahrzeit – Thoughts one year after my father’s death 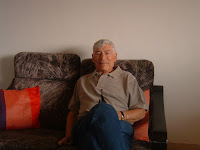 In Judaism, the one-year anniversary of person’s death is an important milestone, representing the end of bereavement and a time for contemplation. My father, Melvyn Spector Rifkind, died last year on June 14 (22 Sivan) at the age of 95 from complications from a stroke. Since then, through conversation and filed-away papers, I, his youngest son, have learned much both about him and myself. This deepening understanding of who he was has led me to a greater sense of thanks, appreciation and acceptance.

Thanks: I can thank my father for providing for us financially, instilling important values and preparing us to be adults. While he never achieved his dream financial goal, he made sure that neither my mother nor I and my brother will want of money. He was a brilliant investor to his last days, outperforming industry experts. Careful in his investments, he almost never fell in love with them and knew when to sell. Furthermore, he taught by example that we should work hard, honestly and ethically to advance ourselves and that the means are no less important the goal. Finally, he succeeded in one of the hardest tasks parents have: preparing their children to stand on their own feet. It is painfully ironic that the litmus test of effective parenting is no longer being needed. Children need to learn how to make our own decisions, learn from our errors and accept responsibility. For this education, I am grateful.

Appreciation: I have also learned to appreciate his achievements, modesty and wisdom. My father, like most of his generation, has a difficult childhood, having to deal with poverty, immigrant parents, and World War II.  He succeeded in becoming a journalist and later a top figure in financial public relations and began a new life in Los Angeles with almost no money in his pocket. He fought in the Ardennes (Battle of the Bulge) and Metz, experiences that marked him for life. Yet, he never talked either about his difficulties or his successes. He exemplified that idea that rewards, whether financial or public recognition, are not the goal in life but instead tools to help create a good life for his family and the community. He generously gave to charity but quietly filed away the letters of gratitude he received. The world was not about him but our role in it. Finally, I have discovered how many of my attitudes came from him. He did not believe that people fundamentally change, a bit like Emile Zola, but accepted people as they were, warts and all. His few close friends were intelligent and generous. Without being rude, he chose not share his time with fools and buffoons. I fully understand and agree.

Acceptance: In this year, I have accepted his death and am happy that he died before corona would have completely isolated him from all that he loved. I also know that he was thoroughly familiar with the strengths and weakness of his sons. Our failure to meet his hopes at any given time may have saddened or angered him for a moment, but he moved on and continued to believe in us, never saying "I told you so". He did not try to change us but instead accentuatde the positive, as the song goes. I have strived to apply this approach when raising my own daughter. Being similar in nature, I saw many of his shortcoming even while he was alive and viewed them as an essential part of him. However, I now better understand their origin and their place. As Edith Piaf, there is nothing to be regretted.

In English, the phrase for deceased people is “May they rest in peace” while in Hebrew it is “May their memory be blessed”. To my father, I can say that you can rest in peace because your memory is blessed.

Posted by Stephen Rifkind at 9:23 AM