Looking glass image? - Being intererviewed by Andrew Morris of Proz.com

I was honored to be interviewed by Andrew Morris of Proz.com. Here is his post:

Face to Face with Stephen Rifkind

Many a translator ends up living in a different culture, far from home. That’s often part of the deal. But few are those, it could be argued, who don’t feel at home until they reach and settle in that second country. It’s as if they were simply born in the wrong place, and had to pack their bags and journey across borders or even continents to find the right one… 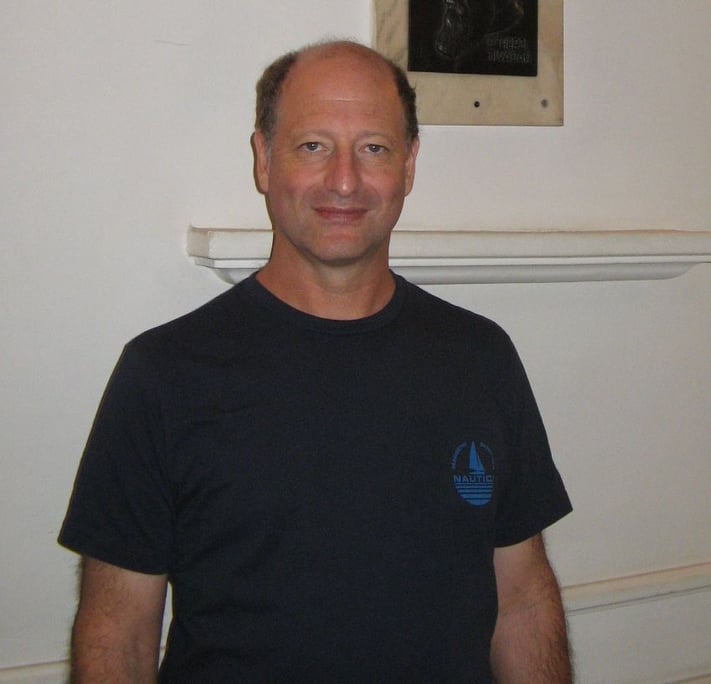 Such was the case of Stephen Rifkind, born into a Jewish family (American father, French mother) in Los Angeles, but who has spent the last 33 years in Israel. His childhood took place in a multilingual home, in which emotional discussions tended to be in French, while money matters were always in English. His maternal grandmother was a Pole who spoke Yiddish, so it was not unusual for intra-family communication to feature sentences containing all three languages jumbled together. Meanwhile, Stephen was packed off to Hebrew school on the weekends, as part of his (non-religious) Jewish education, to complement his regular attendance at a state school. Modern Hebrew was a key part of the weekend curriculum, and – apart from a brief teenage rebellion against the language – the tuition set him up for his move later in life. But the main aim at the time was not to prepare for emigration – in societies like the USA and Australia, made up largely of immigrants (not forgetting indigenous peoples of course), it’s common for people of all backgrounds to want to maintain and even exaggerate their culture. That might find expression in a variety of ways, whether religious, political, social or linguistic – but it all adds up to the dual identity that is the reality of many Americans. If that extra effort is not made, however, the danger is that within three generations you lose all sight of your roots and simply become “an American”.

Still there was something that nagged at Stephen, who felt that he didn’t quite fit in. He knew he was Jewish, even though he never quite understood what that meant. Later in life, he came to formulate a theory that “home is where you feel good” – and realized that he felt good in Israel. He still has family back in LA but sees it now, from a distance, as a money-based society, where you’re judged by your home or your car. In Israel, he says, the realities of life (and death) are omnipresent, which puts things into perspective. It’s an intense place, even in the small town of Karmiel in the Galilee with few traffic jams to speak of, and you can walk around safely at night.

His story as a linguist began back in college where he chose to indulge his gift for languages by studying Russian. However, this was the 1970s, and Stephen suffered from a problem that enjoyed scant recognition back then: dyslexia. Given that the technology of computers and hence spellchecking and other tools barely existed in those days, that seemed to rule out the prospect of becoming a translator. After a brief flirtation with studying Law, Stephen became an English teacher, working up to 30 hours a week with students from all over the world.

And yet the idea of translation wouldn’t quite go away. What’s more, Stephen’s daughter was a toddler at the time, and in his bid to teach her Hebrew, he translated the first three books of Harry Potter in their entirety – orally and spontaneously – while reading to her at bedtime. He never wrote down a word, thereby depriving the world of a masterpiece, but that’s the way these things go…

Around that time he decided he’d had enough of teaching at night, and sat down to do an inventory of his skillset. Armed with an MBA gained in 2002, he knew enough about business, had a grounding in law, and spoke several languages. It was time, he thought, to put them all to good use. This was 2004, and of course computer technology was now a part of everyday life. In setting up his new business as a translator, he decided on three core principles: doing good work, always being on time, and remaining polite in conversation at all times – all of which have stood him in good stead ever since. Boiled down to a single axiom, it’s all about treating the client as you would like to be treated – as simple as that.

Translation was not Stephen’s primary income yet, so it took a couple of years for him to make mistakes, learn from experience, and understand how the industry worked. Not connected to a network of translators at the time, he acquired his knowledge through trial and error, or what we might grandly term the “heuristic method”. “I did it my way,” he says, looking back. Within ten years he had made the slow transition from part time to full-time, although he still likes to teach a few classes, simply to keep himself young and go out and meet some real human beings from time to time (in addition to his wife, who is also a translator). Not to mention to keep abreast of developments in everyday English…

The multilingual thread continues to this day. Hebrew is the language of Stephen’s home – after this time he’s perfectly fluent “though with an accent”. English dominates the workplace, and he still regularly reads French, having lived in Paris. However, his Russian has become somewhat dated – having learned it in the 1970s, he refers to what he knows as “Brezhnev Russian”, and also has plenty to say (not all of it positive!) about the way modern Russian has become affected by English.

Stephen’s translations are from Hebrew to English – his written Hebrew would not permit working in the opposite direction – and focuses on legal and financial texts, along with plenty of certificates. Now an established practitioner, he recognizes nevertheless that the market is constantly changing. Conglomeration has come to affect the agency world, with a predictable impact on pricing. His journey has therefore led him to work with more direct clients – and to incline towards charging project prices. No low bids, no competing on price, no subcontracting. Medium-sized jobs which keep the money coming in, and keep the couple busy. The perfect combination for what is, after all, an expensive country to live in.

So what makes Stephen return time and again to this community, and share his insightful blog posts from time to time? Well, he finds the culture here tolerant and open, lacking the intellectual arrogance of certain groups he’s visited in the past. It’s good to disagree, he says, but not to trash people. Perhaps a recognition that we all see only part of the picture is in order – like the proverbial blind men and the elephant. His writing work he sees as a personal challenge: he’s not (he claims) a natural writer, but he sets himself the goal of synthesizing knowledge for the benefit of others. “This is what I see, here let me share it and find out if you agree” best sums up his approach. If he can make people think, then his work is done.

And in his free time? Well, many of us have interesting and often unpredictable hobbies, but Stephen’s particular variety certainly stands out: for years he was a member of a Balkan dance troupe, no less, and has performed in front of audiences of many thousands around the country. The complex rhythms, the chance to lose yourself in movement, the physicality and utter lack of intellectual tension, all help him discover his alter ego. Perhaps the perfect solution for the cerebral translator: losing yourself as the music plays and the limbs twirl…

Posted by Stephen Rifkind at 6:19 PM