The King is dead - The French heritage of patrimoine 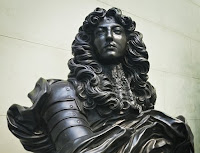 Human societies share a base core of concepts as reflected by words. Examples include house, meal, work and father. While all languages have words for these ideas, the details and connotations as well as relative importance vary from language to language and culture to culture. By going beyond translation, it is possible to use lexicon to understand the priorities and subtleties of any given society.

An interesting example is the French world patrimoine, derived from the Latin for the heritage of the father. Le Petit Robert, the classic French-French dictionary, affectionally known to some Francophiles as “Little Bob”, defines the word in terms of inherited assets, total assets of a person, treasures from the past and the collective inherited characteristics. The English translations include estate, property, holdings, inheritance and heritage. The power of the single word in French is spread into five different words in English, each with its own context. Thus, the concept of passing on gifts exists in both cultures but is lexically expressed differently.

Given the conceptionally wide coverage of the French word, it is no surprise that it appears quite frequently both in terms of quantity and range of subject matter in French. It is rare to find a newspaper or magazine where the word does not appear at least once, if not multiple times. The word can refer to a fancy chateau of Cardinal Richelieu, an asset subject to the incredible estate taxes of French tax law reaching 55-60% percent for non-sibling heirs, the incredible crème fraiche produced by multiple generations of a boutique dairy in some province and the books of Marcel Proust, which are longer than those of Herman Melville and contain much less action. For that matter, people whose direct ancestors survived the black plague are immune to AIDS and have a valuable patrimoine. The word packs quite an impact.

This power goes beyond verbl use and both fuels and is fueled by people. In France, there is a countless number of volunteer groups and government agencies trying to save some patrimoine or another. I have heard of organizations for the preservation of ancient forms of wheat, tomatoes and flour; the houses and recipes of Colette, Anatole France and Monet; old windmills and recipes of the various monarchs; the chansons of the 1920’s and 1930 as well as the street music of the 19th century; church buildings and remnants (often merely “rems”) of some long forgotten castle or fortification;  and furniture and decorations from any century prior to the 21th. All this effort and time reflects the important of the past on the French.

Being half-French but also half-American, I cannot but help consider the psychological impact of such an obsession on French thinking. Assuming a zero-sum status on time for thought and action, i.e., each person has limited quantities of them, it is interesting to make conjectures on the benefits and price of this tendency. As I see it, France and French were once the leading stars of Western civilization, dominating Europe both politically and linguistically. Alas, the German unification by Bismarck, World War I and emergence of the United States and Soviet Union,  to name just a few causes, changed that reality. Still, as in Spain, the French are understandably quite nostalgic for the “good old days”. Relishing them makes the French and French government feel much better.  Furthermore, in themselves, these various heritages are impressive and worth preserving. Many of the chateaux and culinary delights are France are truly impressive.  However, I have always sensed that this conservation is at the expense of valuing the present and developing the future. Why aren’t modern French singers, scientists and industrialists equally esteemed in France or abroad? For the purpose of contrast, the Americans Bill Gates, Steve Jobs and Michael Jordan are known worldwide. Even France’s most iconic modern symbol, the late Johnny Hallyday, is a conscious imitation of Elvis Presley (not the other way around as some French may think). In fact, modern France has produced some impressive buildings, scientific achievements, music and crafts. How many French people have the time or even care to sing their praise?

Thus, the pronounced use of the word patrimoine reflects not only its linguistic flexibility but also the attitude of the French to the past and present. It has been said that people who forget their past are doomed to repeat it but that does not mean that people who celebrate their past are destined to restore it.  Compare Italy of ancient and modern times. As a Francophile, I would say the King is dead, long live the President.

*Insert picture captions to allow access to the blind.
Picture credit: Image by <a href="https://pixabay.com/users/ibudiallo-2645883/?utm_source=link-attribution&amp;utm_medium=referral&amp;utm_campaign=image&amp;utm_content=2811294">Ibrahim Diallo</a> from <a href="https://pixabay.com/?utm_source=link-attribution&amp;utm_medium=referral&amp;utm_campaign=image&amp;utm_content=2811294">Pixabay</a>

Posted by Stephen Rifkind at 7:45 AM